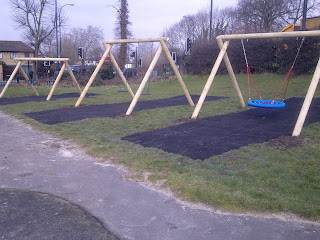 Various people suggested on local forums that the Horniman Triangle could do with some swings, especially for the younger children. Unfortunately, nobody followed through and no application was received by the Co-ordinating Committee at their initial review. It was agreed, however, that the Forest Hill Society could submit a bid as it was felt that the need was there.

The Forest Hill Society therefore visited play parks throughout London and researched suppliers before putting in a last minute bid. This was successful and £9,500 was allocated from a combination of the Assembly Fund and Localities Fund. The Council agreed that they would deliver the project, which allowed the monies to go further as we would not have to pay VAT on the equipment.

The swings have now been installed and will hopefully provide many hours of enjoyment in the years to come. A big thank you to all those involved in this project. 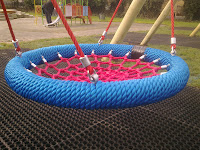 The Forest Hill Society bid on four projects from the Forest Hill Assembly. These were:
Weatherproof Games in the Park
Horniman Theme for Empty Shops
Town Centre Planting Scheme and
Swings for Horniman Triangle.

Other projects which received funding from the Forest Hill Assembly Fund were:

Busy Bees - Sessions for under fives and parents, at the Horniman Museum
at Friday, February 17, 2012

You are correct about the location, you are wrong about the plague pit. There is no evidence to support to idea that it was used for plague burial.
A bit more information can be found at http://www.dulwichsociety.com/newsletters/38-summer-2007/303-villagers-notebook