A number of local historic buildings were open to the public on 17/18 September as part of the London Open House Weekend. Here we focus on one of our many gems. 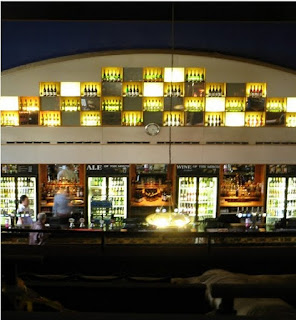 The Capitol pub entertained a couple of hundred or so visitors, taking them around many of the original features. Opened in 1929, and now Grade II listed, this is the only remaining John Stanley Beard designed cinema in the country. In its heyday it sat 1,640 for films, variety shows and the Saturday morning childrens’ club. On the first day the queues went all around the building. It was the perfect location, as the comedy actor Frank Thornton (‘Are You Being Served’, and ‘Last of the Summer Wine’) recalls, being on the convergence of bus, tram and train. Planned for silent movies, it pioneered a new sound system where the speakers went behind the screen, which had 1000s of small holes made in it.

Visitors explored the balcony with all the seats still intact, and marvelled at the views over toward the Greenwich and the ‘Dome’. You can see one of the three resident ghosts in the previous picture.

The architecture has been described as Art Deco Egyptian, but it is more Greco-Roman. The sensitive refurbishment was carefully agreed with English Heritage and Lewisham Council; the few original features not on show were carefully hidden, or where removed replaced by a sympathetic addition. It closed as a cinema in 1973, and as a bingo hall in 1986. Developers would have loved to get their hands on it, but J D Wetherspoons preserved it for public use for the foreseeable future. 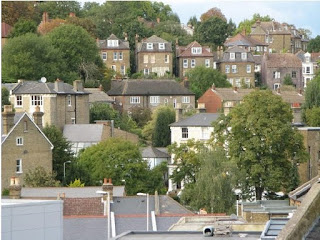 Many thanks to ‘Bean’ for showing us around and hope he recovers swiftly after repeatedly climbing all those stairs. Some members will recall the tour the Society had in one of our pub crawls. Bean please keep looking for the keys to the projectionist’s room, and tell us when you find the original Compton organ, in its time the largest in the country.
The self build ‘Segal’ houses in Walters Way, that share many similarities with timber framed buildings from Elizabethan England, have now been on display at numerous open houses. Many have now been remodelled to provide a most eclectic mix, set-off perfectly on the slope of a wooded hill only spitting distance from Honor Oak Park station.

Numerous Havelock Walk studios and The Horniman Park and Gardens were also open on the day, giving visitors the chance to see behind the scenes.

Last year we showcased Louise House, and in a years time this and the Pools may well be on the Open House list. We would be interested in hearing from others who may wish to be involved in next year’s event.