What is Neighbourhood Planning,and why might it be relevant for us?

The Forest Hill Society and The Sydenham Society invite you to a neighbourhood planning workshop on 21 September 2011 at 7.30pm,  Upstairs at The Hob (opposite Forest Hill Station). 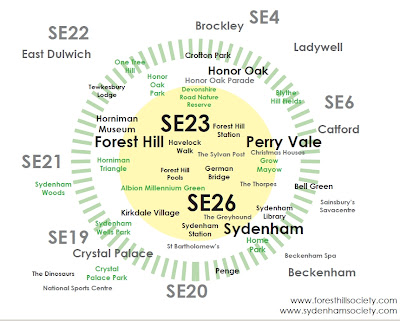 You may have heard about a range of changes to The Planning System that the Government are proposing.  One of the positive things to come out of the draft legislation is the proposal for Neighbourhood Plans that allow communities to put together their own vision and plan for the future in a way that can then become planning policy.

The Forest Hill Society and the Sydenham Society are hosting an event on the 21st September at the Hob to consider the neighbourhood planning proposals, to discuss how it might be relevant for Forest Hill, Perry Vale and Sydenham and whether it is something we should to do.  The idea is that the event gives information about Neighbourhood Planning and Localism, but that it also focusses on the specifics of the areas we are interested in and gets people to think about what could change for the better and what the key issues might be?

We want to include people who don't know anything about this at present but who are simply interested in the area(s).  We don't have a set view about whether a Neighbourhood Plan is the answer or not yet, or how it would work, but understanding the issues behind this is one of the purposes of the event. We particularly want to attract people with good ideas and thoughts about what could be done to improve the area.

The meeting is open to all, from SE23, SE26, and those further afield who are interesting in what neighbourhood planning might mean to them.
at Saturday, September 10, 2011