The Englishman who Posted Himself 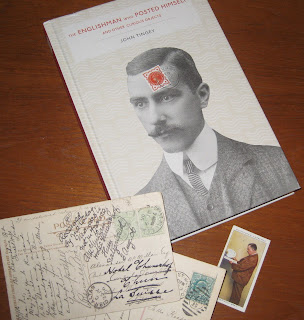 This recently published book describes the exploits of a little known but endearingly eccentric Forest Hill resident. The local historian, Steve Grindlay, has been reading it.

In 1898 Willie Reginald Bray began a detailed study of the Post Office Guide which contained the regulations defining what could and could not be sent through the post.
Bray decided to put these regulations to the test and so he posted, mostly addressed to himself, a wide variety of unwrapped items including a shirt collar, the sole of a shoe, a bicycle pump, a turnip and a hat. Eventually he posted himself, and the long-suffering postman dutifully delivered him to his home in Devonshire Road.

Bray then turned his attention to autographs. He posted thousands of personal requests to the famous, infamous and largely unknown ranging from Churchill, Hitler and Santa Claus to the station master at Forest Hill station. Bray declared himself “The Autograph King” and few could dispute this. He sent out over 32,000 requests and received some 15,000 responses.

Reggie, as he preferred to be known, was born in Stanstead Road in 1879 and educated at St Dunstan’s College. His family moved to Devonshire Road in 1899 and in 1912 Bray moved to Queens Garth, Taymount Rise where he lived until 1939.

This meticulously researched book (in which Steve played a small part) describes Bray’s life in Forest Hill, and lists many of the challenges that he set the postal service. It is beautifully illustrated with many examples of both the objects that Bray posted and the autographs that he collected.