For the first time our volunteers have taken part in a public inquiry, held by the Planning Inspectorate. For four days, we presented evidence against a developer’s proposal to build nine blocks of flats on a green space between Tyson Road, Dunoon Road, Honor Oak Road and Fairlie Gardens. We faced intimidating cross-examination by the developer’s highly experienced barrister. We also cross-examined the developer’s own team of professionals. We now have to wait until April to hear the Inspectorate’s decision.
In 2006, 2008, and 2009 the housing developer, Loromah, proposed building 67-84 flats on this backland location. Each time, the developer was denied planning permission by Lewisham Council. Loromah then went to the Planning Inspectorate – a national body – to appeal against this decision. The public inquiry lasted four days, starting on Tuesday, 23rd February at Lewisham Town Hall.
Although this is primarily a case between Loromah and Lewisham Council, the Forest Hill Society was able to participate as a 'rule 6 party.' 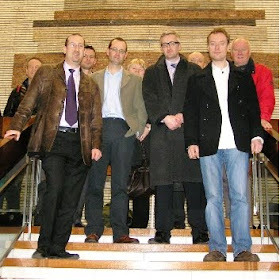 Both Lewisham and Loromah had an impressive collection of barristers, architects and town planners. The Forest Hill Society had a mix of amateur and professional skills, all provided on a voluntary basis. John Hutchinson, a Forest Hill resident with much experience of conservation architecture, led our case with his views on the need for high quality designs in keeping with the character of the area.
John was followed by Michael Abrahams who presented evidence relating to access, crime and poor internal layout. These are major concerns for the Society given the current problems with anti-social behaviour around the Tyson Road Estate which would be right at the entrance to this development. The Society is also concerned that there are lots of hidden areas around the proposed development; behind shrubs, beneath balconies and in the undercroft car parking.
Andrew Wood, who has spearheaded much of the campaigning, then presented the evidence with the help of neighbours, relating to the biodiversity of the site. This included trees, stag beetles, visiting birds and the occasional bat. He expressed concern about the impact this development would have on the four groups of trees with Tree Preservation Orders. And what about the dead trees which are ideal habitats for stag beetles?
The Inspectorate was left in no doubt about the strength of local feeling. Cllr John Russell and several local residents whose homes would be directly impacted by the proposed development came and spoke passionately about their concerns.
Our team, along with Lewisham Council’s own barrister, also had the opportunity to cross-examine Loromah's witnesses.
The inquiry closed with the Inspector complimenting the work of the Forest Hill Society and its contribution to the inquiry process. She also welcomed the additions from all of the local residents who gave evidence and who observed the proceedings.
A big thank you to all those local people who attended throughout the inquiry, those who gave evidence, and those who advised in the run up to this inquiry. We would also like to thank Councillor Russell who not only gave his own evidence, but stepped in at the last minute to cross-examine Loromah’s team.
This inquiry has reaffirmed our position that this development will have a negative effect on the area and is not suitable for such a site.
Highlights of the Week:
at Tuesday, March 09, 2010