May Bank Holiday Revels on our Millennium Green 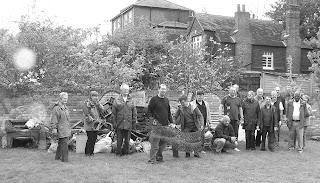 Some places celebrate May Bank holiday with parades, or dancing, maypoles and ribbons. Forest Hill and Sydenham Societies decided to join forces to celebrate with.... a group litter clear-up.
Millennium Gardens, a little visited green oasis at the end of Albion Villas Road, off Sydenham Park Road, was the venue. And, true to Bank Holiday tradition, on a grey, overcast day, enlivened with occasional drizzle, a small group of stalwarts turned up armed mainly with eagerness to sort out any mess.
If that all sounds a bit grim, well, it really wasn’t. With a freshly mown grass meadow, a copse of deciduous trees, bluebells, lilac, frothy masses of mayflowers and the remains of a tennis court with benches, we set to hacking through stinging nettles to retrieve the miscellany of rubbish which had been dumped over the perimeter wall. An hour or so later, a now warmed-up people-chain had passed old sofas, defunct computers, bags of domestic and garden refuse and other junk into a clearing near to the exit from where it could be collected.
It’s amazing what people throw away – and where they choose to throw it. Why would anyone dump their junk into a lovely public space like Millennium Gardens? But discarded old chestnut paling was quickly identified by gardeners in the group as recyclable for bean or netting supports. And a couple of wooden pallets, separated by bricks and stuffed with other debris, were reconstructed into a bug hotel.
There were about thirty of us for the picnic lunch, tucking in with a satisfied air after a job well done. Revels it wasn’t, but a junior cricket match on the meadow green and senior boules on the old tennis court rounded off the afternoon.
Maybe next year we could have dancing and ribbons and maypoles?
at Saturday, June 20, 2009