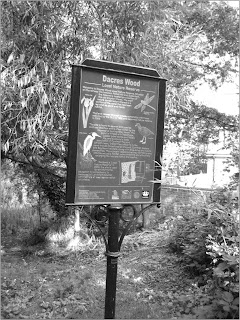 The Dacres Wood Nature Reserve has woodland, a pond and a wide range of wildlife but it’s been locked up since 2003 because of vandalism. Now Susan Wise, one of our local councillors (Perry Vale Ward), wants to open up the site to supervised public access. She explains why it’s such an important part of our area.

Dacres Wood Nature Reserve is situated behind Dacres Road Estate, Perry Vale, and access is via a road behind Homefield House. The nature reserve is owned by the London Borough of Lewisham, and is designated a Grade II site of borough importance. It is a small site, bordered on the western side by the railway cutting (making this part of the “green corridor” that runs along the railway line to London Bridge, where the site’s close abutment to the line encourages the spread of many species along this corridor) and housing to the east, north and south.

The Dacres Wood site was originally part of the Croydon Canal which closed in 1836, and the construction of the railway isolated sections of the canal as “ox-bows”; one of which became the garden of a Victorian house. Following the house’s demolition, the garden was eventually taken over by Lewisham’s Parks Department and opened as a nature reserve in 1989. The site consists of open woodland with glades in the western half, and a large pond and wetland area (which was constructed in 1990) on the southern end of the former canal, in the eastern half. The reserve is fortunate in having a Field Study Centre Building attached to it.

Most of the site is secondary woodland, but there is a discontinuous canopy dominated by a large number of very large turkey oaks, as well as a few horse chestnuts and English oak. This secondary woodland is also made up of young growth of sycamore, English elm, ash, holly, lime and other species, such as English oak, hazel, spotted laurel, rhododendron, cherry, beech, elder and hawthorn. Much of the field layer is dominated by bramble and ivy, with other species, such as bluebell (both native and Spanish) red campion, wood dock, with lords and ladies also present.

A pond near the entrance to the wood is a feature of the site, and has a pond dipping platform with a bridge. The amphibians living in the pond include a large population of smooth newts and common frogs, accompanied by dragon flies and damsel flies. They are part of the diverse invertebrate fauna recorded on the site, which also includes stag beetles, purple hairstreak and speckled wood butterflies. This diversity is a reflection of the site’s history as a remnant of a large Victorian garden, which would have been home to many of the invertebrates from the “semi-natural” countryside. The site’s breeding bird species have included blackcap, chiffchaff, nuthatch and sparrowhawk.
Lewisham had kept the reserve permanently open until 2003, when it was decided to lock the reserve because the site had become extensively vandalised and fly-tipped, and had therefore become a potential health and safety hazard.

However, in 2004 the reserve was given “Local Nature Reserve” status and since then there have been many facilitated school nature study visits involving hundreds of schoolchildren. There have also been numerous “Green Gym” Nature Conservation Volunteer events on the site, and it has participated in several Mayow Park events. Currently, there is a bi-monthly Children’s Wildlife Watch Club on a Saturday, as well as the new “Nature’s Gym” and corporate volunteer workdays held there.

I am very keen to encourage and facilitate more supervised public access to this splendid site, and in order to do this, Lewisham Council is looking to set up a user group to act as champions of the reserve and to oversee visits. Future possible plans include BTCV’s (British Trust for Conservation Volunteers) Green Gym relocating from Creekside, in Deptford, to the Field Centre Building on the reserve so that the project can use the site as a base for operations. If this occurred, BTCV would facilitate and supervise regular weekly public opening of the reserve.