They come from a place far, far away but they have found conditions here perfect for colonisation. In fact, Rose-Ringed Parakeets are now one of the most frequently seen birds in gardens and parks in SE23. And with their emerald-green feathers and noisy squawk, they are an exotic addition to our urban landscape. 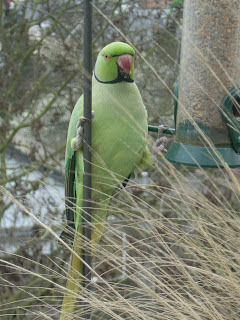 But how can they survive here in South East London? Although they look like they’re used to tropical summers, they actually originate from the foothills of the Himalayas, so they don’t need soaring temperatures in order to feel comfortable. They are also very good generalists, able to survive in a wide range of habitats, like grey squirrels, cockroaches and rats (only prettier).

They are strongly social birds, constantly communicating, even in flight, which is why that unmistakeable cry is so familiar to anyone living in this area.

Flocks of up to fifty are quite common around Forest Hill and Honor Oak and numbers seem to have been increasing rapidly in recent years, perhaps a result of milder winters. Across London as a whole, the population numbers about 30,000 and the RSPB estimates it will rise to nearly 50,000 by 2010. It’s thought that 90% of the UK parakeet population lives in and around London.

Nobody knows for sure how they got here but there are some exciting myths. Are they descended from parakeets released by Jimi Hendrix as a peace offering? Or perhaps they escaped from the set of “The African Queen?” The far more plausible, but prosaic, explanation is that the population of wild parakeets was started by a series of escaped pets.

Opinion is divided as to whether they are a “bad thing” and the government has ordered a survey to assess their impact on native species. There are concerns that they might compete with other hole-nesting birds such as woodpeckers and starlings but there’s no strong evidence. And whether we like it or not, it looks like they are here to
stay.

I love the way these birds make people do a double-take. What's even better is the way their appearance in our gardens and parks makes people look more closely at the other wildlife that shares our Capital. It underlines how accustomed we become to the vibrancy of wildlife.

I have seen records of parakeet sightings in London dating back to 1850, so they've been here a long time.

In this year's Big Garden Birdwatch the parakeet came in eleventh place in Lewisham. That's up one place compared with 2007. The top three garden birds in the borough were:

Both house sparrow and starling are decreasing in number and need our help to support them. Please do put food out for them, or better still, garden for wildlife. Free support and advice is available from rspb.org.uk/hfw.