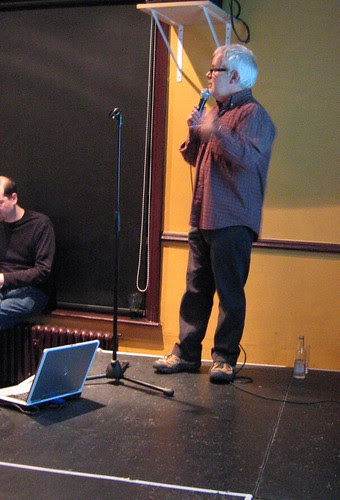 The history of the area continues to fascinate the residents of Forest Hill and Honor Oak, a point that has been demonstrated several times by local historian Steve Grindlay.

When he volunteered to lead a walk around Forest Hill last February, instead of speaking to an expected dozen or so hardy enthusiasts, the group eventually numbered over 80.

You'd think, therefore, that when the plan was hatched for another such event, this time in the convivial surroundings of the ED Comedy Club rooms at The Hob, that expectations for numbers would be high. However, once again we were quite unprepared for the number of people that attended on the night.

Over 120 people turned out to hear a fascinating tour through the history and development of Forest Hill & Honor Oak. A steady trickle of visitors that had started at around 6, turned into a veritable flood by just before 7. Chairs were hastily added and even so some hardy souls sat or stood through the entire presentation in the back stairs with only a limited view of the stage. 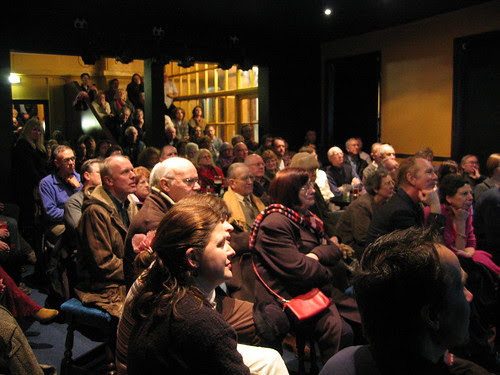 For almost 2 hours, Steve brought the history of many sites and characters of the area to life, thanks to his vast knowledge and his extensive collection of photos, maps and other collected curios.

There was particular interest in the atmospheric railway and its edible vaccuum tubes and also the changing face of shopping and entertainment in the area, such as the arrival of Sainsbury's, the numerous and now departed cinemas, and the rise and fall of local public houses. We hope to be able to link you to the full presentation in due course.

Any one aspect of this talk would have been worth hearing about and we look forward to more opportunities to explore these in more detail and also to cover even more of the local characters that there simply was not enough time for.

Thank you from the Forest Hill Society to Steve Grindlay, to all the 120+ visitors who came and also generously left contributions totalling over £100 for the Society, and to the Hob for providing the venue.

If you want to catch Steve again, he will be talking at the refurbished Forest Hill Library on 28th Feb at 6:30pm (but get there early!)

Residents around and have been involved in a long-running campaign to prevent a developer building 84 flats on land behind the Christian Fellowship Centre. The Council had originally rejected the planning application but the developer appealed and a hearing was set for March 5th.

The area concerned is parkland behind 15 to 17A and .

For photos of the site see here:

Developments
Improvements were made to the footpath between Shipman Road and Sunderland Road, improving lighting, resurfacing the path, and improving the vegetation.

Plans for 84 flats behind Tyson Road were rejected by the council, although we understand that the developer is appealing against the decision

The development of the McDonalds site was approved by the council. Some feedback from the Forest Hill Society was taken into consideration to make sure that the adjacent footpath is adequately lit.

The site of Pizza hut / Red Cross on London Road will be redeveloped. Their first application was rejected as being out of character with the surrounding and they returned with an agreeable design. It is a shame that the same did not happen for the McDonalds site.

Forest Hill Library was closed for a few months to allow for renovations. The improved library has now reopened and looks great.

We are still waiting to hear what will actually happen about the Forest Hill swimming pool. At the end of 2006 I suggested that 2007 would be a 'key year in safeguarding the future of Forest Hill Pool', clearly this was not the case. Throughout 2007 very little seems to have happened and the inaction has meant it has been one of the worst years for Forest Hill pools. We can only hope that the report due to the Mayor and Cabinet in early 2008 will move things forward rapidly so that the pools are reopened on this site as soon as possible.

Shops
2007 was a mixed year for retail in the town centre. After many years in the area Mercury TV shut up shop, other shops such as Blockbuster were also unable to continue in Forest Hill, and we got the news that the post office will close, with all the services moving to the top floor of WHSmith. However new businesses have moved into the area and existing businesses have put further investment into Forest Hill. 2007 saw the refurbishment of The Hob pub and comedy club, a new restaurant in All In One on Perry Vale, and after many years of waiting we finally got a coffee shop in the town centre - The Lemon Grove.

The Department for Transport has earmarked money to provide lifts to connect the two platforms at Forest Hill station, which will make travel possible for users in wheelchairs, and easier for other users with pushchairs or with limited mobility. We can look forward to these improvements being made over the next couple of years

However the Forest Hill Society, and at least 1,200 local residents who have signed our petition, are still concerned about the planned cuts to services to London Bridge, Charing Cross, and possibly the off-peak service to Victoria. This campaign has led to a debate in Parliament specifically about our train services and we continue to work with politicians and rail authorities to get the best possible train services for passengers from Forest Hill.

Events
The Forest Hill Society has organised a number of events over the year including a History Walk, a Nature Walk, two pub crawls, we had a stall at the Rockbourne Youth Club Christmas Fayre, and we organised two general meetings with guest speakers Sir Steve Bullock, the mayor of Lewisham and local artist Jeff Lowe.

The Future
With the East London Line just a couple of years away from Forest Hill we can expect the town centre to be revitalised as Londoners realise what a great location this is with easy access to central London, Docklands, woodlands, parks, our local world class museum, and stunning views across London. 2008-2011 look to be some of the most dynamic times for the development of Forest Hill and with a number of empty shops on the high street, and new developments being planned, we can expect that this will be the time that a number of new shops will move into the area and make Forest Hill a thriving town centre.